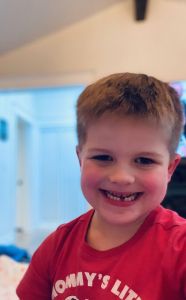 In other news, Wilson lost his first tooth!

I knew this was coming and would go one of two ways. 1- He would barely notice, and might not acknowledge it or show me. 2- He would get very upset about the change and want it put back in his mouth immediately.

Turns out, both options were right to assume. When the time came, he calmly removed his tooth himself. We showed him his reflection and cheered and he was happy for a bit and then went right back to what he was doing before. Then he tried to throw the tooth in the garbage.

His sister insisted we write a letter to the tooth fairy, explaining that Wilson would prefer she leave a toy instead of money because she thought he would really like that.

We showed him books about the tooth fairy, but abstract ideas and concepts like this are really hard for him to understand.

He went to bed and I thought that whole ordeal was way easier than I had anticipated.

But then he started sobbing. He was incredibly sad. He doesn’t have the words, but I know what he was thinking. “Where did my tooth go and what’s this big hole in my mouth and why can’t we just put the tooth back right now?”

He finally calmed after his sweet little friend sent him a video, showing him that she had the lost the very same tooth and that it was all going to be okay.