Many of you have asked about the methyl-B12 injections we give to Wilson, and how/why they can be beneficial for children on the autism spectrum.

Vitamin B12 occurs in five different forms, each with their own unique metabolic role. Methyl-B12 and folate play a central role in a pathway called methylation.

Methylation is responsible for:

Without proper methylation, the brain cannot be effectively fueled and toxic substances throughout the system slow development and processing. The brain is the only part of the body that depends entirely on B12 to detoxify.

“Studies have shown that 90% of ASD children have impaired methylation and 80% decreased levels of glutathione in their cells. Supporting and/or repairing the underlying impairment and deficiency translates into increased social, cognitive and language development.”

The really not-so-fun part: while methyl-B12 does come in several forms, injection is the most effective. We receive the injections in premeasured syringes and inject it just below the skin on his bottom. When injected into the fat, the methyl-B12 is slowly released and stays in his system continually at the same level. Other forms of administering the methyl-B12 cause levels to fluctuate throughout the body. Also, all vitamin B12 forms are absorbed in the small intestine, and many children with autism have an inflammatory bowel condition that affects the small intestine. This can inhibit absorption in the intestinal tract, especially at consistent levels.

So, every third night, we sneak into his room after he has been asleep for at least two hours (so he is in a deep sleep) and clean the site, inject, bandage and give him extra kisses goodnight. We used to try and do this during the day, but he could not stand it (mostly because we had to hold him down to keep him still.) Surprisingly, he rarely wakes up when we do the injection while he is asleep. The needle is very tiny; our doctor had us practice on each other so we knew what he would feel. 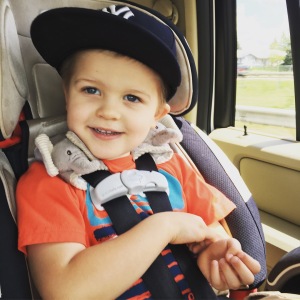 Some of the possible side effects: hyperactivity, self-stimulating behavior, increased mouthing of objects, sleep disturbances, aggression, hitting and biting (this can be caused by frustration due to increased awareness). We have only seen a few of these side effects and they seem to come and go.

We took a break from the injections this past winter to be sure we were actually seeing a big enough difference to make it worth giving them. We had a really rough few months. I noticed decreased awareness, less language, increased irritability and less social interaction. We started the injections again in the spring and saw improvement, slowly, once again.

We began Wilson on the gluten-free/casein-free (GFCF) diet shortly before we began his methyl-B12 injections. We have stuck to it strictly and I believe this also has an impact on the improvements we have seen in him.

One theory behind the GFCF diet is that children with autism don’t process the peptides and proteins in gluten and casein very well, leading to “leaky gut” where the gut can leak into the bloodstream and, in turn, “cloud” areas of the brain. Not a ton of research has been done on this, or methyl-B12 for that matter. Studies are currently underway and we will hopefully have more information in the near future.

As we did with the methyl-B12, we will likely change his diet and add some dairy back in to see how he tolerates it now that we have a new “normal” with all his new supplements in his system for the past several months. It would be ideal for him to be able to eat a wider variety of foods, if possible.

Other supplements Wilson is on: Folate and carnitine (levels were low due to the methylation issue), iron, probiotics, vitamin D, and fish oil (Coromega makes a great one for kids that is orange flavored).

I must note that the benefits we have seen by having Wilson on these supplements and the GFCF diet are not always steady. He still has some good moments and some struggles. We’re always trying to figure out why the harder days or regressions occur. Even with supplementation and his diet, he still cannot process things like food dyes, chlorine from a swimming pool, poor air quality, toxic fumes, etc. as easily as other people do.

We’re always striving to find a balance for this sweet boy, one day at a time.

**The GFCF diet and the methyl-B12 injections do not work the same for every person. Some parents have reported autistic symptoms improving while implementing this diet and/or methyl-B12 and others don’t notice any changes. Talk to your doctor about what the best option is for your child**

Moments of weakness will happen. This does not make you weak.

Wilson had the biggest meltdown I’ve ever dealt with today.

We had an appointment to see our Developmental Pediatrician, who happens to be located in the same hospital where Wilson had a traumatic experience getting blood drawn last month. I worried about this, but figured it would be okay because we were going to a completely different wing of the hospital. He recognized where we were as soon as we drove into the parking garage.

This is when the screaming began. He pleaded to go home, and “no doctor.” I told him we were seeing a different doctor and there would be “no ouchies” today but he could not understand.

I carried his flailing and screaming body through the parking garage, across the street and into the hospital. This is where his meltdown intensified. We would make it about five feet, me carrying him, before he would flail so hard or scream so loud we had to sit on the floor. I tried to help him take breaths like we’ve worked on before, but he was too far gone and wanted OUT.

It broke me to see him so incredibly scared. I sat down on the floor and cried with him, in the middle of the hospital lobby. I couldn’t see a way out of this situation, besides leaving.

We arrived to our doctor’s office to find a construction zone and a sign that they had moved to a different floor. SH*T. A hospital employee walking by stopped and offered to help. I told her I didn’t know how she could. She offered food or drink, but he already had his favorite snack and a juice box in his hands (I think we dropped every other object or article of clothing during this ordeal but he held on to those two things the whole time!) It was really hard to hear one another over his screaming, but we put together that she was actually from the Children’s Developmental Institute that we were trying to get to. She helped us find the elevator and took us in. We skipped check-in and the waiting room and headed right into the sensory room where we calmed down in the dark while watching lights in a sensory tunnel. 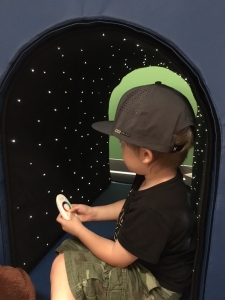 I am beyond thankful for this woman taking the time to help to us, and for persisting when I wanted to give up, go home, and never come back.

Wilson said “no ouchies” on the walk back to the car, I guess he finally believed me! He was back to his happy self and moved right on with his day.

Tomorrow, we’ll get to work on incorporating new social stories, pretend play and visuals to practice in the coming months to help prepare us for the next visit.

But tonight, mama needs a glass of wine.