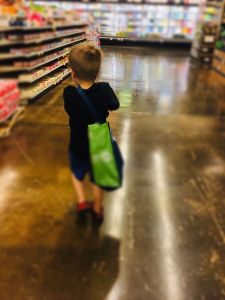 “Do you need to borrow my belt?”

This is the “helpful” offer I received from a man today while I was desperately trying to coax my son off the ground and out of a full blown meltdown in the middle of a busy grocery store parking lot.

What this man couldn’t see was that my son has autism, and we have been practicing going to the grocery store 1-2 times a week for the past month. Most visits have been successful, today was not. We were at a new store and out of routine, which is so important to him.

We had been to the bank prior, which had an absurdly long wait, during which my boy laid on the ground, totally fascinated with the cracks in the grout between the tiles. People stared but he was quiet and happy so it was a successful stop. We moved on to the new grocery store and he did great during the brief visit, and then we had a communication breakdown on the way out.

Here’s the thing. You NEVER fully know what someone else is going through. If you catch yourself judging or making assumptions about a stranger, STOP. You are probably, maybe, sometimes, often or always going to be wrong.

Be kind. Be helpful. Or be QUIET.

You know what WOULD have been helpful? If he had offered to carry my bags, told me to “hang in there” or BOUGHT ME A BEER because I obviously needed one or three. Implying my boy was simply short on discipline was enraging. And sad. And disappointing.

I fumbled with my son’s visual schedule and tried to get down on the hot pavement and reason with him but he was too far gone. When there is risk of him hurting himself, I have to physically intervene. Which, SPOILER, he does not like.

I told my three-year-old daughter to hang on to my shirt and I scooped up my almost-six-year-old and carried his flailing, screaming body through the parking lot. He kicked me, kicked cars (sorry!) and hit himself. It wasn’t pretty.

I’ll tell you it hasn’t gotten much easier over these past few years having all those eyes on us in the heat of these moments, and that comment did not help. I know exactly where he should stick that stupid belt.

This kid is so resilient though. Someday I will be too.

Besides mourning the loss of the stickers he scored at the bank (they were a casualty of the scuffle) he has moved on and is back to his happy self. And here I am still blood-boiling over it. Which is so silly, the whole ordeal was much harder on him. He couldn’t communicate his needs or his frustration and was abruptly physically removed. He never even noticed the bystanders.

I learn so much from this tough little cookie and am so proud of all the work he puts in. You can bet we’ll be back at the grocery store next week.